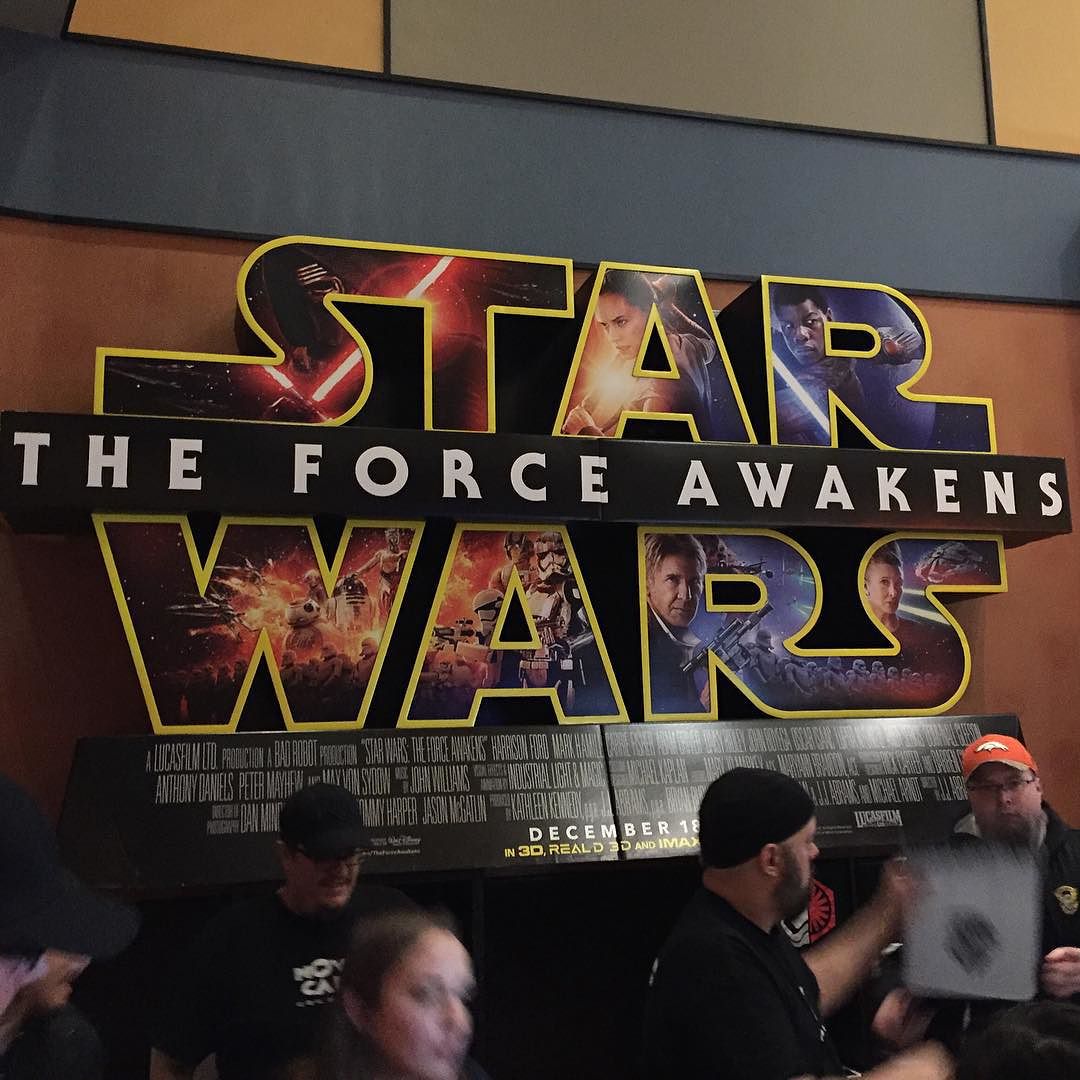 Star Wars, The Mystery is Refreshing 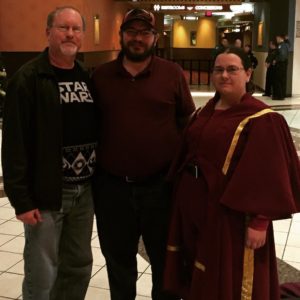 When I went to see The Force Awakens with my friend Kevin J. Anderson on opening night, (which was absolutely awesome, by the way!!!) Kevin said something along the lines that while it was nice that his fans would defend his work so much, it was actually kind of refreshing to have a movie where he had no idea what was going to happen.

At the time, I really didn’t think much about it, because I WAS WATCHING A NEW STAR WARS MOVIE WITH KEVIN J. ANDERSON! However, after watching The Force Awakens for the third time, a few things clicked.

It all started when I was overhearing a conversation before the movie started, about what color lightsaber Yoda and Luke had.

“All lightsabers are blue.”

“No, all Jedi lightsabers are green.”

After hearing this go back and forth for a minute, I just had to turn around and settle the debate with my vast geeky knowledge. Okay, okay, I know, this wasn’t a debate requiring all that much geeky knowledge, but that’s beside the point.

<< WARNING: Mild Spoilers beyond this point. >>

If you haven’t seen the movie, this stuff will give a little away, but not everything. It might just make you more curious or make you pay attention to things better.

After the movie, the same group of people started a discussion about the origin of Rey. They went through a few different theories, and then asked me what I thought. Who was this Rey character?

And I realized, that’s awesome! 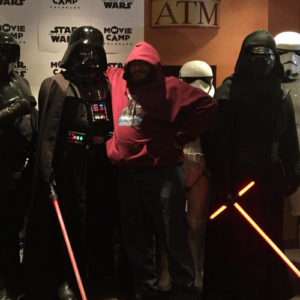 I know it sucks that they did away with all of the extended universe as Star Wars canon, but it gives all of us Star Wars fans a unique chance to experience Star Wars the same way those who lived the original release in the 70’s and 80’s got to experience it. With complete aw and wonder.

Think about it. When the prequels were released, we (big Star Wars fans) knew what was going to happen. We knew that Senator Palpatine would become the Emperor. We knew Anakin would be tempted to the dark side and end up fighting Obi-Wan near a lava pool, turning him into the masked machine-man that the galaxy learned to fear. We knew that he would be the father of two kids who would be strong in the force.

Overall, there wasn’t all that much that was a surprise for us. At least none of the major plot points. We went to watch the movies just to see how they pulled off what we knew would happen, and to complain if they pulled it off in a way we didn’t like.

But today, we can watch a new Star Wars series, and have no idea what’s going to happen! We have assumptions and conjectures, but we don’t know. Isn’t it great?

These next four years are going to be interesting, as we wait for Episodes 8 and 9 to come out. After those movies come out, we will have all the answers, we will have more books to give us way too much information, and we will dominate geeky conversations over every small point that can be conceived of. Then the balance will resume where when a geek is asked the origin story of some character they can come to the rescue.

But until then, let’s just enjoy this strange time where we don’t know what’s going to happen.

What I loved about this movie

There were some really cool parts in this movie. One of the interesting things was that it showed an example of how the Jedi were first born, when they didn’t have anyone to train them in the ways of the force, but the let the force guide them through instincts and visions. Watching Rey come into her powers off nothing more than a few legends and visions, is neat.

They didn’t completely remake everything. There were several throw backs to the original series. When J.J. remade Star Trek, he basically threw away everything and remade everything with more flashiness than a ferengi knows what to do with. But in this movie, the TIE fighter weapons displays looked like what we saw in A New Hope, only upgraded. And the targeting computer in the Falcon was the exact same graphics and sounds used in the originals. They did an amazing job at adding new ships, droids, and weapons to the universe without feeling like they had to remake everything. And it was fantastic.

So yeah, there was a lot that I loved about this movie. The only thing that really bugged me was pretty much everything to do with R2, which sucks, since he’s one of my favorite characters. But all of that, hopefully, will be explained in a satisfying way in the next movie.

And now, to discuss THE BIG SPOILER.

If you haven’t seen the movie, you really shouldn’t read any further than this!

First up, my favorite line in this movie.

Luke is a Jedi, but you are his father.

That line, says a lot. Yeah, Jedi can train people to use the force and have cool abilities, but nobody has more influence in someone’s life than their father. Good or bad, a father will impact you more than even Luke Skywalker.

But even a perfect father can’t guarantee that their son will stay on the straight and narrow. What’s up with Ben? That guy is way too emo. I understand that he has the whole light side dark side conflict going on inside of him, and his temper tantrums are funny, but the final scene where he needed help seemed to add more confusion than anything. Why? Why was that the task he needed to do at all, let alone needing his father’s help with?

Killing off Han, that was a low blow. I wish they didn’t do that. However, of any way that he could go, was there a better way? In a strange attempt to redeem his son from the path that he was following? I still think it would have been better to set his pistol on stun, knock the guy out, then drag him home and give him the whooping of his life, along with a lot of parental love, but that was a good death. 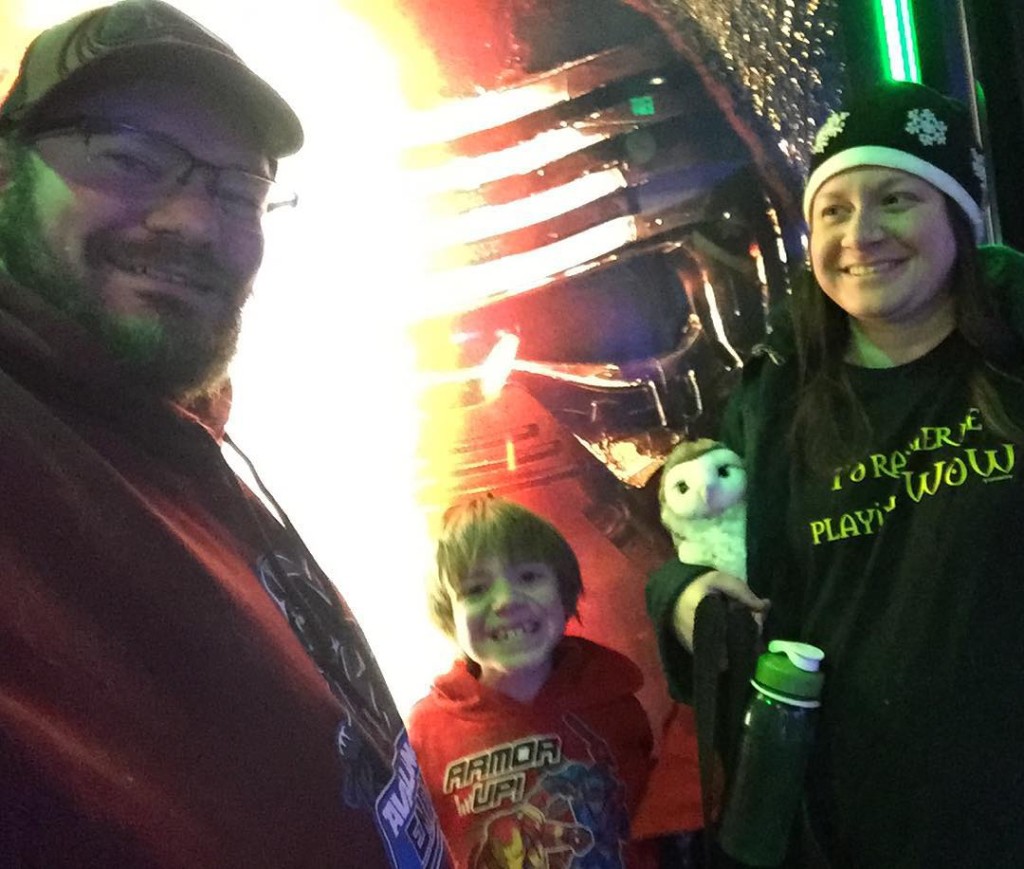 I really hope I didn’t spoil the movie for anyone, but you can’t say I didn’t warn you.

What did you think of the movie? Favorite scenes? Favorite new character? Let me know in the comments!