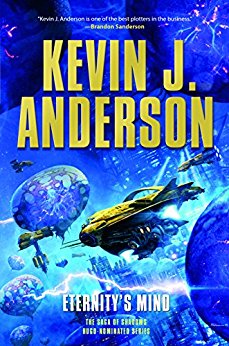 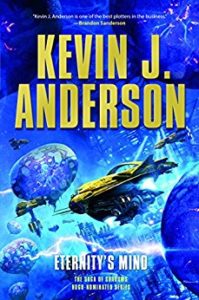 Eternity’s Mind by Kevin J. Anderson (Audio) (Finished) This book provided lots of entertainment during my long car drive last weekend (more on that later). I didn’t know this was the final book in the series until about halfway through. It did a good job of finishing the story and was enjoyable. I like it. 4 out of 5 stars. Interestingly enough, last year while I was writing my story Eternity’s Ark was at the same time Kevin was talking about this book on social media, a lot. I wonder if his title had any influence on my title?

The Rogue Retrieval by Dan Koboldt (ebook) (38%) So far this has been an interesting book. I do love to read about magicians and seeing a magician trying to fake his way through a medieval society which is used to real magic has been fun. So far I give it 3 out of 5 stars because it is interesting and entertaining, but I’ll have to see how the end goes before I know if it earns more stars.

Summer Knight by Jim Butcher (Audio) (42%) The next book in the Dresden Files universe in my re-read through. It’s interesting the hints given in this book that we still don’t know the full implications of, 9+ books later. I’m reminded this time through that Harry really doesn’t know a whole lot about the magical world. He does his best with what he knows but depends on others to introduce him to things like werewolves, other vampire courts, and even the knowledge of the Summer/Winter lady, mother, and knight. It’s interesting to watch how much he grows throughout the series.

The Great Wall (Movie) This movie was okay. The story was interesting, as were the special effects. It was interesting to see all the weapons they came up with to fight the creatures. Although the movie wasn’t really super exciting. Maybe this is because I was trying to do some business stuff at the same time, but it just felt like an “okay” movie. Overall I regret buying it and wished I had waited a few days to rent it at the redbox and saved $13.